Tag Archives for " No means no " 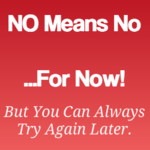 Want to LISTEN to me READ this article to you? Use this audio player…

This article has nothing to do with #MeToo or anything like that.

With that out of the way, let me ask you a question…

Have you ever been turned down when you ask someone if they want something now, only to have them come back and ask if they can still get that something later?

Put another way: Have you ever offered something to someone & they refused you at first, but then they come back later & asked if your offer was still good? Huh?

I used to have a buddy back in college, and every time we’d go out to eat, I’d offer him a bite of my meal, as a good friend does. He’d always refuse at first, but sure enough – 5 minutes later, he’d ask me if he could try what I was eating. Every. Single. Time!

Human nature can be crazy sometimes. Many people seem to have some sort of internal programming that runs them and their actions. This programming tells them what to say, do, think, act, and how to behave. (Think “I identify as…”)

Many times, their programming makes them refuse an offer the first time they hear or see it – especially if it comes from an unfamiliar source. And especially if that offer is communicated in a way that confuses them, because a confused mind says “no.”
We’ll stick with the classic definition of “confused” for now.

For example, let’s say you offer a seller the opportunity to sell their house to you with owner financing. You try to explain that they’ll save agent’s commissions, not have to pay closing costs, and have a much faster & easier way to sell their house. But if they’re confused, they’ll say no. If their programming is overwhelmed, they’ll just say “no, not interested” – automatically! 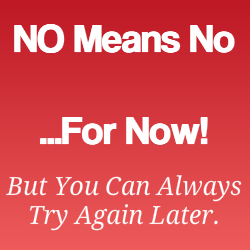 But are they truly saying “No” forever? Or just in the moment? I don’t know. Do you? No, of course not! How could we possibly know that?  Exactly! We can’t.

Remember that the majority of business you do will come from following up with your prospects, and everyone’s minds will change with time and circumstance.

For example, let’s say you talk to a seller one day, and he just decided to put his house up for sale. He still has the mindset that all he has to do is put up a couple of ‘For Sale’ signs in the front yard, and people will start knocking on his door & try to throw money at him to buy his house. He wants to sell his house for full price, all cash – and believes he’ll easily be able to do just that.

When you talk with him and get all the information you need, you bring up the possibility of him selling his beautiful house on terms – taking payments for a little while.  What do you think his natural reaction is going to be? Exactly! He’s probably going to tell you to go pound sand. Hopefully in a polite way, of course.

So what do you do? Hang up the phone & cry? Tell yourself that this business doesn’t work? Convince yourself that this individual is a representation of every seller there is?  Hopefully not! If your skin is that thin, this is probably the wrong business for you.
And if that’s the case, I have some well-worn advice for you: Don’t quit your day job.

Now let’s fast forward a few weeks. Let’s say that this particular seller has now had his house out there on the open market for a little while. He’s gotten a ton of phone calls… most of which are from real estate agents telling the seller why he should list his house with them because they’re so wonderful and they can get him a million dollars more than the meager price he’s asking.  The rest of the calls he’s gotten are from looky-loos who are just kicking tires.

Maybe he’s even gotten a few people to stop by the house and act interested, only to never be heard from again. Or just curious neighbors, wanting to compare houses & munch on some free cookies.

After a few weeks of this, he’s getting tired of the constant games. The stupid calls. People wasting his time and tracking dirt in his kitchen.

Just when he’s about to give up and give in by listing the house with an agent (which 90%+ of For Sale By Owner sellers wind up doing), he gets another call… from you!

When you call, you remind him of your previous conversation & ask him “You must have sold your house by now, right?!”  He remembers you, then sheepishly admits that he hasn’t sold it yet. Then you act surprised and ask him why not? Such a beautiful house like that should have sold quickly, right? So what’s the problem here?

And now we’re on a whole new playing field! Now the possibility of doing a terms deal is dramatically increased in your favor…simply because you were organized, persistent, and followed up with him.

How Many Deals Is Your Lack Of Organization Costing You?

As I’ve written in previous articles, you NEED a simple system of follow up. I honestly don’t care what it is. It could be anything from a pad of paper to a spreadsheet to a full-blown CRM. Doesn’t matter… EXCEPT: It has to be something that works for YOU.

Most people are not too technically-oriented. If that’s you, then just go low-tech by getting a notebook and take notes in there for every seller you talk to. It’s better than nothing, and a heck of a lot better than relying on your memory!

If you know how to set up a spreadsheet, just use one of those. Could be Microsoft Excel – or my favorite (FREE) way: Google Sheets. I love the latter, because you can access it from anywhere, anytime – as long as you have a device (smartphone, PC, laptop, tablet, etc.) and an internet connection.

My mentor students are provided with a fantastic spreadsheet template – on both Excel and Google Sheets. It has everything you need, and those students who use it love it. Shoot, I even provide a nice tutorial video on how to use it, so there’s no excuse.

Business is a Numbers Game

Many years ago, baseball legend Babe Ruth was known as the Home Run King because of all the home runs he’d smack out of the ballpark. But he was also the strikeout king. More than once, he was given crap by his teammates when he’d strike out, then smile a huge smile when he’d jog back to the dugout.

“Why are you smiling? You just struck out again!” they’d say.

His reply was classic: “Yeah, but that just means I’m one more at-bat (attempt) away from my next home run!”

If you truly want to have success, you’ve got to talk to more people, more often.

You’ve got to be organized with your conversations, so that you can FOLLOW UP with the people who told you ‘No’ or ‘Maybe’ the first time or two you talked with them.

And above all, DON’T EVER…EVER GIVE UP! (It’s not allowed here)

When you think about it, business is actually a lot like dating. You might be interested in someone, then get up the nerve to ask them out. Sure, they might tell you ‘No’ at first for a million different reasons, and most of them have nothing to do with you. But if you’re persistent and sincere, you just might find that the ‘no’ you hear today will often turn out to be a ‘yes’ tomorrow!

Just be sure to be respectful & get consent. You don’t want to become another #MeToo statistic!
Yes, that was a joke. Don’t get offended.  😉

And don’t even get me started on how “F.U.” really means “Follow Up!”

Let me know what you think!  LEAVE A COMMENT BELOW…